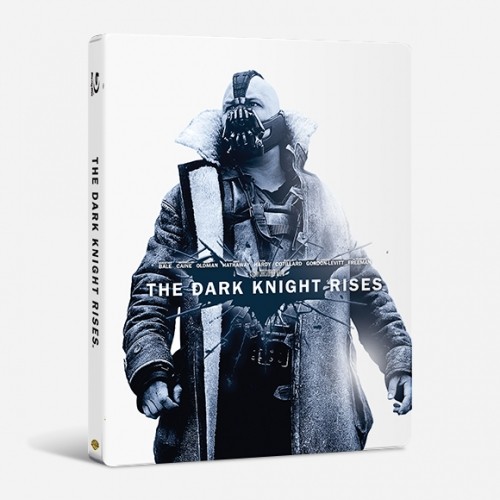 (Up to 18 minutes of hidden "Flickable" content on disc 1)

Return to the Batcave- Production - Ending the Knight ## Witness the reconstruction of the Batcave with time-lapse photography along with interviews and commentary from the construction crew and filmmakers. (03:33)

Beneath Gotham - Production -Ending the Knight ## Director Christopher Nolan and the production designers discuss the design and build of Bane's lair. (02:29)

The Bat - Production -Ending the Knight ## Director Christopher Nolan gives Batman a new mode of transportation in The Dark Knight Rises. Learn what went into the design and construction of the Dark Knight’s new vehicle and how a combination of special effects, visual effects, and sound engineering were used to realistically sell the illus. (11:03)

Batman vs Bane - Production - Ending the Knight ## The filmmakers and actors reveal how they planned and shot t he epic fight sequence between Batman and Bane. (06:05)

Armory Accepted - Production - Ending the Knight ## See how special effects and a miniature unit were used to simulate the demolition drop of the Tumbler through the ceiling of Bane’s lair. (03:15)

Gameday Destruction - Production - Ending the Knight ## The filmmakers describe the production plan that went into executing the jaw-dropping demolition sequence at Gotham Stadium. (06:39)

Demolishing a City Street - Production - Ending the Knight ## Learn how a series of practical special effects were used to simulate the complete destruction of a city street. (04:11)

The Pit - Production - Ending the Knight ## The filmmakers explain the design and construction of two giant, vertical sets: the underground prison and the well, where all the climbing stunts were performed. (03:00)

The Chant - Production - Ending the Knight ## Christopher Nolan and Hans Zimmer discuss the creation of the chant that formed the basis of the score’s Bane suites. (05:15)

The War on Wall Street - Production - Ending the Knight ## Get a glimpse behind the coordination and production of the epic battle for Gotham City that involved a thousand extra s engaged in hand-to-hand combat on New York City’s Wall Street.. (06:36)

Race to the Reactor - Production - Ending the Knight ## Watch how the filmmakers orchestrated the film's climactic chase sequence with multiple Tumblers, the Batpod, and the hi gh-flying Bat racing down the streets of Pittsburgh and Los Angeles. (07:48)

The Journey of Bruce Wayne - Character - Ending the Knight ## Get insight into story and thematic choices that structured the final chapter of Bruce Wayne's journey as Batman. (08:48)

Gotham's Reckoning - Character - Ending the Knight ## The filmmakers reflect on their reinvention of Bane and all the elements that went into making him Batman’s most lethal adversary. (10:01)

A Girls Gotta Eat - Character - Ending the Knight ## The filmmakers discuss the challenge of bringing an iconic character to life, detailing the acting choices, fashion, stunts, and Selina Kyle and her tactical-ego, Catwoman. (09:22)

Shadows & Light in Large Format - Reflections - Ending the Knight ## Discover the philosophy and methodology of capturing The Dark Knight Rises on the grand canvas of Imax™ film. (05:32)

The End of A Legend- Reflections - Ending the Knight ## The filmmakers give their final thoughts on working on The Dark Knight Rises and what it was like to be a part of The Dark knight legend. (09:09)

Despite his tarnished reputation after the events of The Dark Knight, in which he took the rap for Dent's crimes, Batman feels compelled to intervene to assist the city and its police force which is struggling to cope with Bane's plans to destroy the city.